Mairead Vaughan (choreographer) and Dara O’Brien (composer) co-founded Shakram Dance Company in 1999 on their return from India and their respective studies in Indian Classical dance (Bharatanatyam), Yoga and North Indian Classical music. Between 1999- 2014, Shakram created thirteen original choreographic works, all of which were funded by the Arts Council of Ireland.

While their work primarily influenced by distinctive aspects of Indian Classical music and dance, further travel to remote regions such as the Amazon rain forest, Machu Picchu, Colca Canon, Lake Titicaca, Ise of Taquile in Ecuador as well as Peru, Borneo, Malaysia and Thailand, inspired a rich, diverse approach to their collaborative practice.  Over a period of fifteen years, they sought to discover new modes of communication and juxtaposition between movement, sound and space. A distinctive idiosyncratic movement vocabulary informed a choreographic signature for the company, which Irish Times writer Michael Seaver in reference to a choreographic work called ‘The Anima and Animus’ in 2003 wrote,

“Oppositional movement within the body, revealed Vaughan’s experience in Bharatanatyam, but it is the metrical discipline of the Indian dance form that enables her to craft seductive contrapuntal quartets that I could have watched all night. This clear grasp of form, a growing vocabulary of movement and her willingness to avoid the obvious has been a revelation.” 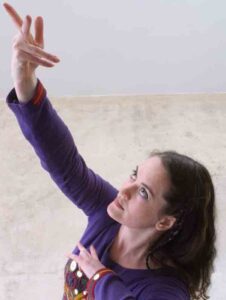 Mairead Vaughan is a dance artist, choreographer, researcher and lecturer. She trained as a professional dancer receiving a BA in Performing Arts (Dance) from Northern School of Contemporary Dance, Leeds. She graduated with an MA in Contemporary Dance Performance, from the University of Limerick where she recently completed an Arts Practice Phd. Her research examined the symbiotic relationship between the body-mind and environment, through the creation of two original choreographic works. Mairead was both a full-time and part-time lecturer in Contemporary Dance, Somatic Practices and Choreography at the Irish World Academy of Music and Dance, University of Limerick and a guest lecturer at The School of Music and Theatre, University College Cork.

Dara O’Brien is a composer, performer (sitar, guitar), music educator and music therapist. He completed his doctoral studies at UCC School of Music and Theatre where he teaches Indian classical music and sitar. Dara has extensive experience composing music for contemporary dance and film/video art, and was co-director of Shakram Dance Company. He also co-directs the Indian Classical Music Society of Ireland. His performances include Indian classical music, “fusion” and experimental music (National Concert Hall, Festival of World Cultures, Electric Picnic, Bray Jazz Festival, The View, RTE 1 television, music for dance). Dara has worked with Common Ground and as a MUS-E artist, exploring alternative arts education for the disadvantaged, and currently works in the field of autism.